If you think you can safely exercise without your mask in a gym during the pandemic, two new government reports show you are mistaken.

Coronavirus outbreaks at fitness centers in Chicago and Honolulu last summer were likely the result of exercisers and instructors not wearing masks, researchers from the U.S. Centers for Disease Control and Prevention discovered.

In the Chicago study, 60% of people who attended in-person fitness classes at one facility between Aug. 24 and Sept. 1, 2020, tested positive for COVID-19, while another 7% reported symptoms consistent with the disease. Although some infection prevention measures were in place, such as temperature checks and symptom screenings upon entry, exercisers were allowed to remove their masks while they sweated and strained. 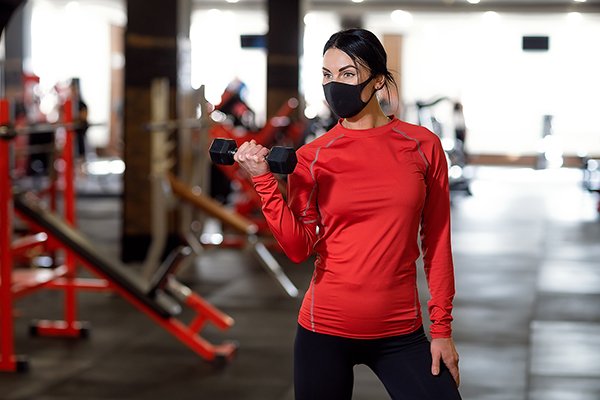 \”It\’s very important for individuals who would like to attend a gym and work out to be cognizant of what the COVID symptoms are, and to be aware that if you are feeling something that looks and feels like a COVID-19 symptom, to stay home as a precaution,\” said Richard Teran, a CDC epidemiologist in Chicago who co-authored the Chicago case study.

\”This outbreak reinforces the need for combined COVID-19 prevention strategies, including universal mask use in public settings when persons are with others who do not live in the same household, especially indoors; testing of symptomatic persons and those who have been exposed to SARS-CoV-2; self-isolation after symptom onset or a positive COVID-19 test result; and quarantining of persons who have been exposed to SARS-CoV-2,\” the report stated.

In the Honolulu study, 21 cases were linked to a fitness instructor who tested positive for COVID-19 on July 1. Two days before experiencing symptoms, the fitness instructor led a yoga class for 27 people while wearing a mask and there were no reported cases among those participants. But the same instructor did not wear a mask while leading a cycling class several hours before he experienced symptoms. All 10 people in the class, none of whom wore a mask, later tested positive for COVID-19. Among them was a fitness instructor from another facility. He became acutely ill and was hospitalized in an intensive care unit, the CDC report said.

Twelve hours before that second instructor experienced symptoms, he held several small kickboxing sessions and a personal training session. Of 11 people who were exposed, 10 tested positive in early July. All 10 developed COVID-19 symptoms, and one was hospitalized in the intensive care unit. On July 22, the city of Honolulu passed emergency orders requiring face coverings in fitness centers, including during exercise, the CDC report noted.

\”Transmission was likely facilitated by not wearing face masks, extended close contact, and poor room ventilation. SARS-CoV-2 transmission occurred despite stationary cycles being spaced ≥6-ft apart. Instructor A\’s shouting throughout the 1-hour stationary cycling class might have contributed to transmission; aerosol emission during speech has been correlated with loudness, and COVID-19 outbreaks related to intense physical activity and singing have been previously reported,\” Laura Groves, and colleagues at the Hawaii Department of Health and the CDC COVID-19 Response Team, explained in their report.

Both case studies were published online Feb. 24 in the CDC\’s Morbidity and Mortality Weekly Report.

The outbreaks described in the CDC studies were caused by inconsistent mask use and other lapses in social distancing behavior, and perhaps buildings that were inadequately ventilated, Alex Larcom, senior manager of health promotion and health policy for the International Health Racquet and Sportsclub Association, told The New York Times.

\”In Chicago, you had members who went to class when they were symptomatic or COVID-positive,\” Larcom said. Also, that facility was not originally designed to be a fitness center, and the screening for symptoms appeared to have been poorly carried out, she added.

\”Society-wide, we are relying on people who are sick or think they are sick to remove themselves from society,\” Larcom told the Times. Those who went to the gym even though they had symptoms \”were probably also going to the grocery store, going out to eat and moving through the community.\”

Since summer, many health and fitness clubs have put new safety protocols in place and improved ventilation in their facilities, Larcom noted.

The CDC researchers stressed that a multipronged strategy is needed in fitness facilities, including good ventilation, consistent and correct mask use, persistent reminders that employees and patrons are to stay home when sick, and more hand-washing stations.

More information
Visit the U.S. Centers for Disease Control and Prevention for more on how to stay safe when you are out in public during the pandemic.